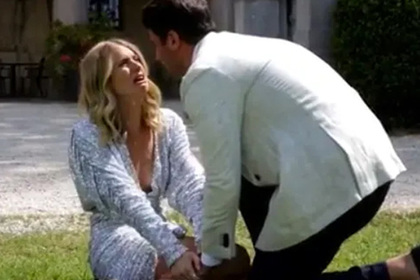 The blogger will get scolding from Gwyneth Paltrow for cheating fans

Instagram blogger Marissa Casey Fuchs faces an investigation at work after she and her lover Gabriel Grossman organized a show with sponsors, in the final of this show, Gabriel was supposed to make a marriage proposal.

According to BuzzFeed, Fuchs works in the Gwyneth Paltrow’s company that is called Goop. This company sells women’s clothing, drugs and cosmetics, and has its own website with articles on women’s topics. The blogger works as a sales manager and manages brand partnership at the same time.

On June 18, Fuchs said that her boyfriend had prepared a game in the final of which he wanted to make her a proposal. The girl reacted as if she didn’t know what Grossman was up to. Instagram posts with products of different brands, including jewelry, did not contain advertisements.

The fact that the love story turned out to be fake became known after the presentation appeared in the network. All the events were fully described in this document and the possibility of advertising integrations was indicated as well. However, the blogger does not tell directly that the show is held under the auspices of Goop, Fuchs mentioned all the time that she worked for the company and the name of the company was written in the profile description on Instagram. Although the love story began in the Goop office in New York, and the people who worked there were tagged in the video.

Noora Raj Brown, director of communications in Goop, emphasized that the story of the proposal on Instagram has nothing in common with the company. According to her, an internal audit is currently being held, as “Marissa did not receive any formal permission from Goop for such actions”. Brown did not answer directly whether a blogger was threatened to be fired cialis pris.

BuzzFeed also attempted to contact the fiance’s employer, Gabriel Grossman. He is Vice President of the American financial conglomerate Morgan Stanley. The representative only confirmed that Grossman really works for them in this position, refusing further comments.

For now Marissa and Gabriel have not published anything in their profiles after the end of the story.